Honored with the DuPage County
Law Firm of the Year Award
Contact Us for a Free Consultation
Home
Attorney Profiles
Patrick D. Austermuehle 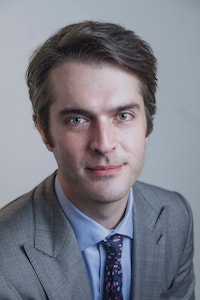 Patrick D. Austermuehle, is a partner at Lubin Austermuehle where he has experience with consumer fraud, class-action, and complex business litigation in both federal and state courts, including at the appellate level. He earned a BS from the University of Wisconsin and a JD, cum laude, from Chicago-Kent College of Law in 2009. While at Chicago-Kent, he was the Notes and Comments Editor at the Chicago Kent Law Review. Before joining Lubin Austermuehle, Mr. Austermuehle served as a law clerk for the Cook County State’s Attorney and as a Judicial Extern at the United States District Court for the Northern District of Illinois. He was admitted to the Illinois Bar in 2009.

From Patrick's interview for the Masters of the Courtroom series on ReelLawyers.com.

Admitted to Illinois Bar
Member Since: 2009 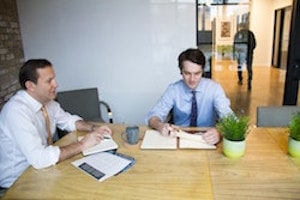 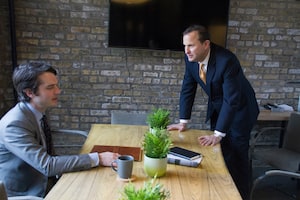 Boundas v. Abercrombie & Fitch, Federal Court for the Northern District of Illinois, Judge Feinerman. Pending. Representing plaintiffs that received a $25 purchase reward card that did not contain an expiration date but which defendant claimed should have contained an expiration date and will no longer honor. Class certified and request for appeal of class certification denied by the 7th Circuit. 2011 WL 1676053.

Booking Fee Class Actions, Federal Court for the Northern District of Illinois. We are prosecuting a number of class actions against various Chicago area towns for charging arrested persons with a booking fee and then not providing for hearing to contest the right to charge the fee. We have obtained class certification and defeated motions to dismiss in some of these cases. Two of these cases settled on a class-wide basis. We are appealing the dismissal of one of these cases to the 7th Circuit.

Jane Doe v. Modeling School, Circuit Court of Cook County, Chancery Division. Represented plaintiff putative class representative/student who took a modeling and acting course. Plaintiff alleged violations of the Illinois vocational schools and consumer fraud acts involving alleged misrepresentations concealing that the course would not lead to work in the field. Case settled on a class wide basis with class members being able to claim a partial refund on their tuition.

Jane Doe, et al. v. Trade School, Circuit Court of DuPage County, Chancery Division. Class Certified in contested proceedings. We represented a class of students who took a medical sonography course for claimed violations of the Illinois vocational schools and consumer fraud acts involving alleged misrepresentations concealing that the course would not lead to work in the field. The Class prevailed in motions to appeal class certification to the Appellate Court and Illinois Supreme Court. Case settled on a class wide basis with class members receiving a substantial tuition refund.

Jane Doe et al v. Electronics Retailer, Circuit Court of Cook County, Chancery Division. Represented Plaintiffs who received a $500 gas and grocery card that retailer allegedly would not honor. Class certified. Case settled on a class-wide basis with approximately 7,000 class members being able to claim up to $1000 depending on the number of claimants who participate in the settlement.

Dr. FM, LLC v. Hoscon Ltd. et al, American Arbitration Association and Circuit Court of Cook County, Chancery Division and Law Division. Judges Mikva and White. 2013-2016. Our client the Plaintiff, an emergency room physician formed a partnership with two other physicians to open an urgent care center. Our client's partners wrongfully removed him from the partnership and denying him the fruits of quarter-million-dollar investment to start the business. Our client's investment included $80,000 in cash but also $180,000 in estimated "sweat equity" for providing start-up services. We sought to unwind the transaction and return of his entire investment. We prevailed at an arbitration hearing and obtained a judgment for 100% of our client's claimed damages. The Defendants then tried to contend that the arbitrator's award was improper in state proceedings after retaining new lawyers. We prevailed on those claims as well. We then initiated a judgment enforcement action and collected all of our client's damages plus 9% post judgment interest. Opposing Counsel: Anish Parikh; John M. O'Driscoll (Tressler LLP).

Mercado v. Levy et al, American Arbitration Association. Arbitrator James S. Montana Jr. Represented Defendants, a school and their owners in a lawsuit alleging defamation arising from a partnership and employment suit. We obtained substantial video-taped evidence from multiple witnesses supporting that our clients did not defame the Plaintiff and that all of their statements were supported by various eye witnesses. Case settled.

Williams v. Marder et al, United States District Court, Northern District of Illinois, Eastern Division. Judge Guzman. 2011. Represented Defendant in a lawsuit claiming defamation, tortious interference with inheritance expectancy and employment and malicious prosecution. Defendant was sued as a result of his alleged efforts to try to protect his father who suffered from dementia and Alzheimer's from alleged abuse and neglect by a nurse who had sought to obtain a $3 million bequest from the father. Summary judgment entered in Defendant's favor on all counts. Frrokajs v. Charlie Trotters, United States District Court Northern District of Illinois, Eastern Division, Judge Shadur. 2012-2013. Represented wine purchased who paid over $46,000 for an allegedly counterfeit magnum size bottle of Domaine Romanee-Conti Burgundy wine. The case settled the same year we filed it on confidential terms after the Court denied the motion to dismiss for lack of federal jurisdiction. Opposing Counsel: Kaplan Papadakis & Gournis.

Cohen v Ofer Mizrahi Diamonds Inc. et al, Circuit Court of Cook County, Chancery Division, Judge Synder. 2018. Represented Defendants some of the largest diamond wholesalers in the world who were falsely accused of a $1.5 million fraud by another wholesaler. After we filed a motion for sanctions demonstrating that the claims were baseless and a $16,000,000 defamation suit against Plaintiff in federal court the case settled less than a year after suit was filed. Defendant was a required to provide a full retraction and apology. Opposing Counsel: Mark Hammervold.

Ofer Mizrahi Diamonds Inc. and Ofer Mizrahi Ltd. v. David Cohen, United States District Court, Northern District of Illinois, Eastern Division. Judge Kendall. 2018. Represented Plaintiffs. Our clients some of the largest diamond wholesalers in the world sued another diamond wholesaler for $16,000,000 allegedly bringing a false lawsuit against them falsely accusing them of fraud and then publishing the allegedly false lawsuit on the internet and issuing a press release. The case was settled for undisclosed financial terms as well as with Defendant providing a full written retraction and apology for making the false claims. Opposing Counsel: Mark Hammervold.

Client Reviews
★★★★★
I was referred to Peter Lubin from someone in the car business to handle a law suit. From the moment I made the appointment Peter and his staff were outstanding. This wasn't an easy case, most lawyers had turned me down. However, Peter took the time to meet with me and review everything. He took on the case, and constantly communicated with me about updates and case information. We beat this non-compete agreement case in record time. I would use him again and recommend him to my closest family and friends. 5 stars is not enough to thank him for his service. Sebastian R.
★★★★★
I worked on two occasions with Peter Lubin and his staff. They took their time with me and discussed each and every item in detail. The group makes you feel like you are part of the family and not just another hourly charge. I recommend Peter to anyone who asks me for a referral. If you are looking for a top notch attorney at a reasonable rate, look no further than Lubin Austermuehle. Kurt A.
★★★★★
Excellent law firm. My case was a complicated arbitration dispute from another state. Was handled with utmost professionalism and decency. Mr. Peter Lubin was able to successfully resolve the case on my behalf and got me a very favorable settlement. Would recommend to anyone looking for a serious law firm. Great staff and great lawyers! Albey L.
★★★★★
I have known Peter Lubin for over 30 years. He has represented me on occasion with sound legal advice. He is a shrewd and tough negotiator leading to positive outcomes and averting prolonged legal hassles in court. He comes from a family with a legal pedigree and deep roots in Chicago's top legal community. You want him on your case. You need him on your opponents case. He won't stop fighting until he wins. Christopher G.
★★★★★
Peter was really nice and helpful when I came to him with an initial question about a non-compete. Would definitely reach out again, recommended to everyone. Johannes B.
View More
Submit a Law Firm Client Review